The Soul of Cycling

As a child, I always had a bicycle to roam around our family dairy farm or to ride the three miles into town for something to do during the Wisconsin summers. There was also the various bike competitions that my brother and I got into, like building a ramp to see who could jump their bike higher and farther or piling our little red wagon with anything heavy, tie it behind the bike, and see who could pull it the farthest.  I do believe I have a few scars remaining from these childhood bicycle games (which I usually lost, by the way). 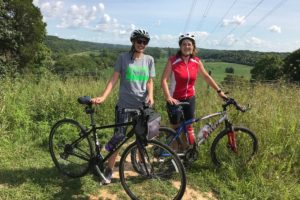 In high school, my bike was a means of independence to meet up with friends. During this time, tie-dye was in and I decided it would be so cool to use various cans of spray paint in order to create a tie-dye bike. Twenty years later that dear bike remains in my parent’s basement with Dad’s occasional reminder of its existence.

As life took me various places beyond home and school—into a nursing career, entering the Sisters of Charity of Nazareth, 11 years missioned in Belize, Central America—my bike remained behind, precious memories of childhood. During these years, I did not pine for a bike ride or even consider seeking out where or how to find a bike to hop on and go for a jaunt.  I didn’t miss what it had to offer, until . . .

In 2017, I returned to Kentucky after living and ministering in Belize. During this major transition, running became a means of releasing stress and simply put–it was good for my soul.

A community member and I connected over our enjoyment of being active and outdoors. She was with me at my first 5k and a part of my support team when I ran a half-marathon. However, she would point to bicycling as that which is good for her soul. She invited me to go biking with her in the Parklands, a system of 5 major parks linked together with bike paths that wind up and down through the beautiful Kentucky knobs. Even after 30 miles (with an elevation total over 1,500 feet) and legs like jello, my spirit was soaring! I tapped into a sense of freedom, exhilaration, and wonder that I can only describe as being grace-filled. I returned from this ride determined that biking, too, was good for my soul and I began putting aside money each month until I could purchase a bike.

After nearly a year of saving and in part as a birthday gift from the two sisters with whom I live, a bike now stands under the stairs of our apartment entryway. It awaits me for a jaunt of a few miles around the neighborhood or for the next Tour de Parklands. While not every ride produces the same exhilaration or inspiration, there is no doubt it always has something to offer. The rhythm of the stride, the caressing (sometimes smacking) of the wind, and the absolute beauty of the world, has allowed for some of my most honest thinking, praying and simply time of being.

I am excited to see what further evolution the bicycle will take in my life’s journey!